British Manufacturing has Always Stepped Up in Times of National Need 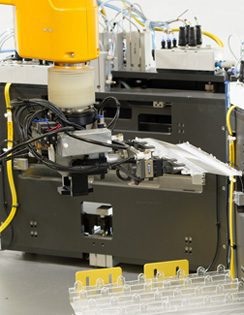 There are many heroes in the battle against COVID-19: NHS workers, care workers, teachers, supermarket workers, and so many more who are providing vital public services that allow people to stay safe and comfortable at home.

Manufacturers have also been called upon to step up and help the national effort. In March, the PM asked manufacturers to deliver essential ventilation equipment for hospitals. Now, in April, the call is to produce PPE to support our key workers caring for the sick, elderly, and vulnerable in our society. And as usual, manufacturers are keen to step up to that challenge.

Why are manufacturers needed so badly right now?

At the start of the year, there were just 4,000 ventilators available in the UK. With around 5% of COVID patients needing ventilation, the government estimated that to deal with the number of COVID cases, the UK needed at least 30,000.

The problem? There are very few ventilator manufacturers in the UK. The existing manufacturers weren’t equipped to ramp up production to that scale on such short notice, which is why the PM called upon the entire manufacturing sector to see who could help. And just like in the two world wars, manufacturers stepped up.

Of course, not all manufacturers were able to help. Ventilators are very complex to produce, combining electro-mechanical parts, integrated circuit boards, processors, and tight health standards and manufacturing tolerances. Add to that the issue of a globally compromised supply chain for essential parts, and the task is a very tricky one.

The COVID-19 crisis meant that available supplies of PPE were quickly used up, and the NHS needed more critical PPE to keep their staff and patients protected. But with a global epidemic, the usual supply chains for PPE were compromised, and global demand was skyrocketing – making it difficult to source enough.

It was clear that the UK would need to produce more of its own PPE – and fast. When the second call from unions for the government to ask UK manufacturers to ramp up production of PPE equipment came, yet more manufacturers stepped up to provide what was needed. The Manufacturer has a list of every manufacturer who is helping to provide equipment and PPE for the NHS.

Other times in history when manufacturing has stepped up

The two world wars are probably the most notable time in history when manufacturing was called upon to step up and deliver to support the nation, particularly during the Second World War. This wartime effort provides a precedent for manufacturers retooling and delivering mass production in response to immediate demand.

Manufacturers during the Second World War were called upon to produce more aircraft. They rose to this challenge and eventually surpassed it due to the innovative De Havilland Mosquito fighter-bomber. A combination of manufacturers worked on the ground-breaking aircraft – including musical instrument and furniture manufacturers who had no previous experience with aircraft.

It wasn’t just aircraft and weapons where manufacturing supported the war efforts. Transferring fuel across the Channel via an underwater delivery system was another astounding wartime achievement from the manufacturing sector.

Manufacturing for the future

In times of national crisis, UK manufacturing has always been able to step up and produce essential items, often requiring retooling and a complete about-turn in the products being produced by factories.

However, with low investment, skills shortages, and the slow adoption of robotics, there is much to be done to ensure that we are ready to step up in future emergencies. Now is the time for more manufacturers to adopt Industry 4.0 standards like automation. It’s time to show that we value the UK manufacturing industry with long-term investment in future-proofing the sector.

Innomech specialises in the design, development, and production of automation machines for the manufacturing industry. We work with manufacturing businesses across the country, and we’re passionate about supporting the manufacturing sector. If you would like support and guidance with optimising your automated manufacturing processes, please email us.

← Is Now The Time To Automate Your Manufacturing? Obstacles to Automation in the UK →